This page is here to collect our thoughts about a joint project around dynamic geometry, proofs and constructions. This is a draft under construction which collects ideas for cooperation initiated at Castro Urdiales in February 2010.

Technological tools are widely used to teach mathematics in schools. Dynamic Geometry Software (DGS) and Computer Algebra Software (CAS) are the two families of software that are well represented. These tools are widely used to explore, experiment, visualize, calculate, measure, find counter examples, conjecture... but most of them can not be used directly to build or check a proof.

Proof is a crucial aspect of mathematics and therefore should be integrated more into the mathematical tools. However the status of proof in the education and the impact of dynamic geometry software on the teaching of geometry and more precisely on the proving activity is a well addressed issue in the literature (See for example Furinghetti, F. & Paoloa Domingo (2003), de Villiers (1990)). In Furinghetti, F. & Paoloa Domingo (2003), the authors “confirm the interlacement of exploration and proof”. We think that these two activities could better interlaced if they were both conducted using the computer. The idea collected here are driven by the motivation to bring together dynamic geometry systems and various aspects of computer-aided theorem proving. We think that both worlds have their individual strengths (appealing visualisation and rigorisity respectively) which could benefit to each other.

So these webpages address software eliciting interest in and satisfying curiosity for the principles of mathematics and their beauty, and since anyone knows that essential insights cannot be scheduled for a certain lesson at high school, we can conclude:

The envisaged software shall cover a wide range of functionality.

In order to gain wide usage for such software, it also should support mathematics as is at schools today.

State of the art

comment (PQ): shouldn't be RP - Repository of Problems instead of Repository of Theorems? for once the RP will match the words (or we should change it to RT), and the repository of problems will strees the fact that we may have open problems also.

Dynamic Geometry Software are tools which allow to create and then manipulate geometric constructions.

With respect to educational use ITP's emphasis for comprehensibility by humans is important: in order to have human readable proofs, also the underlying knowledge, axioms and definitions, need to be human readable. This is accomplished best by LCF-style provers like Coq or Isabelle.

Regarding the variety of concepts and technologies discussed in this wiki one might expect a conglomeration of different pieces of software. Quite in contrary, our goal is unifying the technologies in one Mathematics Assistant (MA), which is general enough to include algebra as well --- general as, for instance, underlying tools like Isabelle or Coq.

Existing systems and their capabilities

The vision is that we integrate existing systems rather than starting from scratch. For convenience we give here a list of systems which could be involved. This list is not supposed to be a final decision, just an enumeration of candidates which we deem suitable according to our current knowledge and are represented to a certain extent among the authors; other suitable systems may be added accordingly, while not all systems listed here may turn out to be really suitable in the end.

The main methods for automated deduction in geometry are:

Roughly speaking, geometric constraints solving consists in producing geometric figures satisfying a specification. This specification can be given under the form of a geometric statement, in the education domain, or a dimensioned sketch, in the CAD domain.

Example of a geometric statement:

Example of a dimensioned sketch: 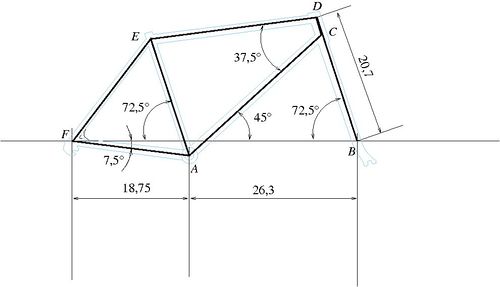 From a logical point of view, such a statement is a <math>\forall \exists</math>-formula and solving a geometric constraint system consists in yielding

In the following, we focus on the second aspect.

The introduction stresses the role of proof as 'a crucial aspect of mathematics', and addresses the importance of 'interlacements of exploration and proof'.

However, an educational context makes clear, that proof is a highly elaborated concept comprehensible only togehter with concepts like axiom, theorem etc. So there are good reasons, that high schools precede proving with another entry point to geometry:

Stepwise construction of figures is how children first encounter geometry, using paper and pencil or a DGS. Such construction problems provide the possibility of active learning, of learning by trial and error, while intuitively convincing feedback by the figure is guaranteed.

Thus we stress the demand of software, which supports stepwise constructions in geometry and proving.

Support for construction implies efficient and highly mechanised user guidance -- such kind of tutoring has not yet been realised by any system, it poses a challenging issue for our considerations here. Mechanised generation of user guidance might start from programs in a high-level language addressed above, coded by hand or generated automatically.

The experimental tutoring system ISAC employs a new technology [3] for user guidance in stepwise construction of calculations in applied mathematics --- together with a discussion, how this technology could be transferred from algebra to geometry.

Remarkable in the context of these webpages is, that the design of such a tutoring system raises challenges for ATP and ITP, which are discussed below.

Interactive formal proof in geometry has been studied by Frédérique Guilhot who developped a large amount of highschool geometry using the Coq proof assistant.

There has been a lot of efforts invested in automated theorem provers in geometry and also in developing collections of formalized geometry knowledge. But, it is still to develop systems that automatically generate formal proofs. Also, it would be welcome to develop systems that automatically generate synthetic (hopefully readable) proofs of geometry conjectures. One option is to use coherent logic as a framework for that (Janicic 2010).

Some ADG methods have been formalized in ITP.

The recently emerged connection of ITPs to ATPs for proof search under the brand sledgehammer [5] could also turn out helpful.

In the early days of interactive theorem proving, the task of writing »proofs« meant to write down so-called tactic scripts which consisted of a programmatic combination of so-called tactics of which each would implement a particular proof strategy. This was successful but turned out to be inconvenient: tactic scripts seldom resemble the abstract human-invented ideas behind a proof, are brittle, and always refer to an implicit goal state which is not represented in the script itself, making maintenance difficult. To overcome this, declarative proof languages were developed,

The core idea is that instead of writing a programmatic description how to accomplish a proof, the proof writer gives a proof text describing what to prove in each step, where each step needs to be justified by either a subproof or a terminal tactical proof. This means a proof writer is free to express his ideas about the proof in his text such that a reader can follow his thoughts accordingly.

This is interesting in our context because such proof languages allow for fine-granular control while still be able to integrate automatic proof procedures. For example, in the Isar framework, the fundamental single proof step is resolution with natural deduction rules. Any proven theorem can again be used as natural deduction rule. Consequently, if domain-specific proof steps can be encoded into natural deduction rules, they can be applied directly within Isar. Beside that the system provides generic proof tools (called methods) which can instantiated for particular domains: induction (for higher-order natural deduction rules), simplification (equational rewriting with equalities), classical reasoning. Especially the two latter help to avoid spelling out proof parts explicitly which are considered trivial by the human reader.

TGTP (Thousands of Geometric problems for geometric Theorem Provers) is a system aiming to support the testing and evaluation of geometric automated theorem proving (GATP) systems, to help ensure that performance results accurately reflect the capabilities of the GATP system being considered [10].

A recent developement in ITP user interfaces could have beneficial impact on our aims: a model for proof documents [11]. It is motivated by the observation that typical ITP systems barely provide support for contemporary editing technology and it would be waste of resources to build editors from scratch. Therefore it is proposed to design ITP systems in a way that they can interact with existing editor frameworks. One should refrain from the temptation to model arbitrary details of the ITP system in the user interface since this would be bare duplication with all negative effects like keeping versions consistent etc. Instead the interaction between ITP system and user interface is kept to a simple document model which supports basic activities like open new document, insert document fragment, drop document fragment, conclude document etc. The ITP system judges which parts of the document are to be considered valid or not and reports on that to the user interface which visualizes this to the end user accordingly (e.g. red underlining), thus mimicking the look-and-feel of contemporary IDEs for programming languages. Hence the user interface need only the knowledge whether something is valid or not, but not why.

A concrete instance of this document model is presented using Isabelle/HOL and the JVM-based jEdit editor framework, but the ideas can be transferred to similar components.

In our scenario the visual user interface would be a DGS. It would map actions in a geometry scenario (draw circle, connect dots, construct triangle, ...) onto changes of a underlying document; the checking is done within the ITP which gives feedback which steps are valid.

exercise correction
produce a system which can check if the answer to a construction exercise is correct (this can involve ATP methods embedded in ITP or not); this can be regarded a special case of the following:

exercise hints
produce a system which can help the student to stepwise build a construction, see above; this includes developing techniques to adapt the hints to the curriculum of the students.

interactive geometric proof
produce a system to build proofs in geometry interactively (this requires having ATP to ease the interactive proof, ways to visualize statements in DGS, a readable proof language, …)

problem collection
produce a database of geometry theorems with their proof and figures (starting with GeoThms).; conjectures should be accompanied by (when possible):

integrated system
design one system providing support from high-school to university: pupils doing an elementary construction should be able to ask the system for underlying knowledge, for instance the axiom system the MMA is using in this construction.

Interoperability between proof system and DGS

The tutoring technology of Lucas-Interpretation (LucIn) combines computation and deduction such that this section is closely related to many other sections here.

These examples shall provide concrete material for discussion. The collection of examples might be extended during the course of discussion.

The construction of a circle, which contains all points of a given triangle, is one of the first constructions a learners encounters --- and DGS convincingly show the invariant, when dragging one of the points on the screen. Leet's discuss two appoaches:

Since the area method is not always close to human readable proofs, other approaches might emerge during discussions here, probably using more 'traditional axioms' [13] restricted to Euclidean plane.

Define and formalize the notion of ruler and compass construction in a proof assistant. ITP systems could be used to ensure that construction steps given by the user are applicable and consistent.